This woman was featured in People Magazine, ForksOverKnives.com, Mercy for Animals, and BlackWomenLosingWeight.com, for the health transformation she managed to accomplish in less than a year.

Her name is Ashley Chong.

Ashley Chong from RawandRadiant.com has an amazing story of will power and determination to get healthy once again and once and for all.

Many people just like Ashley struggle with the decision to eat the right things and live the right lifestyle that will make you and keep you healthy. When Ashley looked in the mirror, she was 252 lbs, 5′ 2 and a young 21 year old woman ready to face her world of limitless possibilities.

But what she saw in the mirror was not a pretty picture.

The Standard American Diet had failed her.

What Ashley did was turned to research to find an answer to end the many years of struggle and get her health on track.

Her research informed her that a raw vegan diet could contribute to weight loss and improved overall health.

Armed with determination, she decided to give a raw vegan diet a try.

She shares that she had a driving motivation for going cold turkey vegan overnight. In less than a year, she was 125 lbs lighter, glowing and radiantly beautiful. 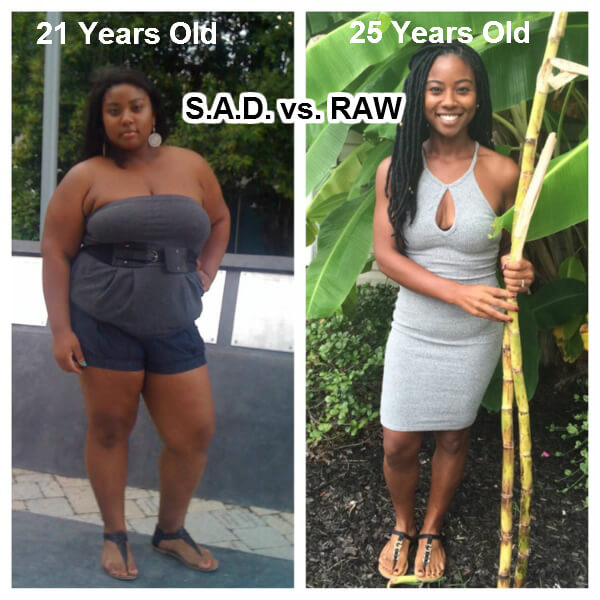 Hearing how Ashley went cold turkey overnight tells me she was motivated by more than just a desire to fit a dress (read below.) Not many people can achieve what Ashley did in the short time frame that she did.

Not only that, people who do loose weight that fast, oftentimes have to deal with ridding themselves of the excess flabby skin. This lands them in surgery under the knife to get it cut off.

I will let Ashley tell you her story.

It was about three years ago, I was beginning to look for ways to lose weight yet again. This time it was for my sister’s upcoming wedding and unlike previous attempts to shed the weight, I decided to do what I do best; research. I studied nutrition, human biology, disease, and how these things were related.

What I found was absolutely mind-blowing. I found people who were reversing disease, losing weight, and gaining energy by solely eating raw fruit, vegetables, and leafy greens. So instead of following advice from doctors, who were telling me restrict calories, eat meat, and to take a popular weight-loss drug called phentermine, I did the exact opposite.

I went 100% raw vegan overnight and it changed my life. I ended up losing about 125lbs in little less than a year.

My husband then followed suit about five months after I did and lost approximately 85lbs.

Thriving on a plant-based diet, I dived into studying the nutrient make-up of different foods,live food recipes, and so much more. Although I was shedding weight, it became way more than the size of the pants that kept falling off of me and more about the entire health status of my physical body.

The longer I ate living foods and gave up the standard American diet, the more I experienced euphoria, glowing skin, and an increased amount of energy.

I realized that foods should not be processed, altered, or heated in any way and that nature provides our food in its perfect form ready to eat.

The results were amazing.

I am impressed so much with Ashley Chong’s story that I want to get a little more up close and personal into Ms. “Raw Cold Turkey” Ashley’s (a name I like to call her) methods, mindset and meals and share it with RawVeganMatters Fans.

If you would like to join me on a LIVE Coaching call with Ashley Chong, blow up the comment section below to let me know. Leave a comment below asking for the date and time.

UPDATE: LISTEN TO THE REPLAY OF THIS LIVE COACHING CALL HERE!